Numbers are an abstract concept for children and they need many opportunities to investigate numbers in different ways. This blog explores the importance of develoing early number sense and how Spot On With Numbers, a new tactile resource, can be used to support pupils to build the firm foundations for their mathematical journey.

One of the most effective ways to help children really understand maths is to use a wide variety of manipulatives.

Numbers are an abstract concept for children. They can be, for instance, symbols, words, sounds, quantities or measurements. Children need to experience numbers in a tactile way before they can start attributing any meaning to them. For some children, counting can be like reciting a nursery rhyme. ‘Hey diddle diddle, the cat and the fiddle, the cow jumped over the moon…’ is often recited without thinking about the words we are actually saying, like the bizarre notion of the dish running away with the spoon! If children count physical objects, they are more likely to attribute meaning to the words ‘one, two, three…’. Furthermore, children need many opportunities to explore numbers in different ways, so that they can learn to identify numbers in many different forms.

Spot On With Numbers is a new tactile resource, which children can use to make numbers in many different ways. The Pegs and Boards offer a multisensory experience of number which has the added benefit of developing pincer grips as children place the pegs onto the boards. Children love creating patterns that look familiar to the ones that they have seen on a dice, which they associate with games. The ability to then move the pegs into less familiar patterns helps to develop subitising skills. These opportunities to make connections with numbers, together with a chance to reason and verbalise their learning, helps children develop number sense and forms firm foundations for their mathematical journey.

The inside of the oval below shows some of the many representations of the number 3 which can be made with Spot On With Numbers’ Pegs and Boards: 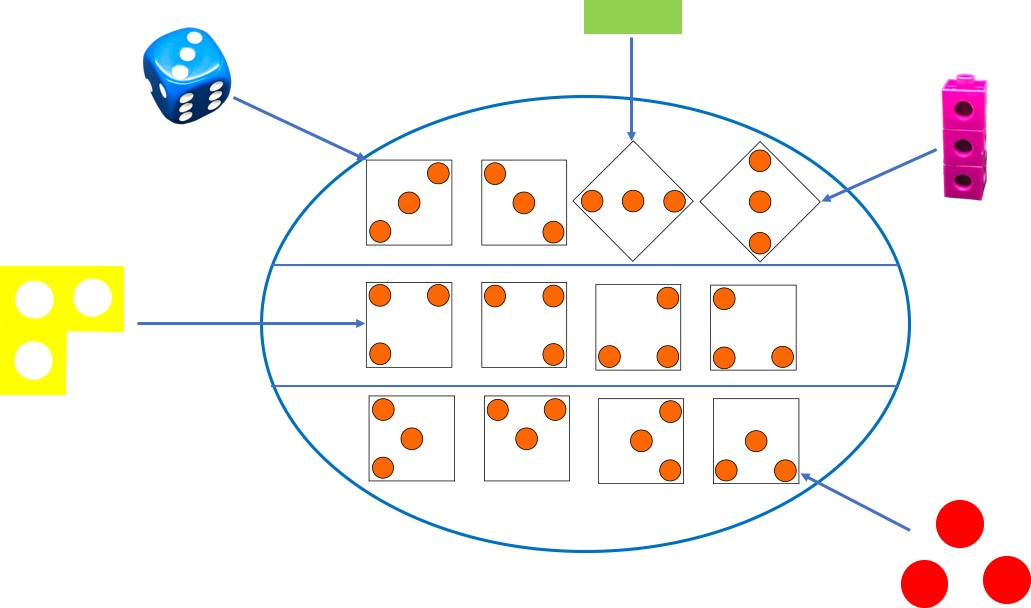 Each configuration can then be linked to the examples of other resources in the classroom (shown outside the oval above). The Pegs and Boards therefore provide a link between the many representations of the number 3 that a child may encounter. By creating a pattern of 3 with the Pegs and Boards in many different representations, children have the opportunity to reason and make connections. Questions like, ‘what is the same, what is different?’ exposes children to the concept of conservation, encouraging them to realise that if no pegs are removed or added, the number will be the same. Furthermore, when explaining the differences in the images in each row above, children may rotate the one board to make it the same as the other. The other configurations require moving a peg which also develops a child’s spatial skills, in what is essentially a number activity.

Once a child has counted three, many times, they may start to instantly recognise, or subitise the total. This develops naturally as humans are born with an instinct for subitising small quantities, a skill that we share with many animals. However, as humans need to communicate this feel for numbers, children need to connect the word they have learnt for ‘three’ to the innate sense they have for three. Counting helps to give children a word for the number they see and how it relates to other numbers. By three years of age, a child can build an arrangement of three objects after briefly being shown an image of the same quantity, thereby demonstrating an ability to subitise. They will still need many opportunities to count a set of three objects to make the link. Playing with the Pegs and Boards, shows that 3 can look very different, but exploring the links between all these different representations helps children appreciate the connection between the abstract concept of ‘three’ and an instinctual feel they have for the number.

One of the five big ideas in teaching for mastery is the importance of providing representation and structure to deepen understanding by representing concepts, using objects, pictures and patterns and making connections between different representations.

A key skill of the teacher is to be able to represent the maths in ways that provide access and insight for pupils.

Spot On With Numbers enables children to represent numbers in a way that is meaningful to them. They can be linked to dice patterns and their fingers.

Fingers are the first place a child begins to understand numbers. Jo Boaler from Stanford University, in her article ‘Why Kids Should Use Their Fingers in Math Class’, refers to research from neuroscience which has shown that when we perform a calculation problem, an area in the brain which ‘sees’ fingers lights up and the more complex the calculation, the greater the extent that this somatosensory area is engaged. Encouraging use of fingers and showing links to the fingers should therefore be a key component of early maths teaching. 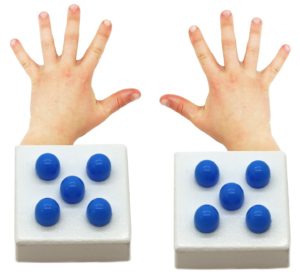 The Pegs and Boards naturally break numbers into small sets, similar to the way the brain does when subitising. The boards therefore create a manageable way for children to view numbers larger than five. The ability to decompose and compose numbers into parts of the whole is also very important for the development of fluency. Children can make numbers and move them together and apart to explore calculations. When children can visualise or are encouraged to verbalise their understanding using the Pegs and Boards, they will have an efficient strategy for later performing the same task mentally.

Spot On With Numbers’ Pegs and Boards are sold separately or included in a complete ‘Number Bonds Pack’. The Pack includes visuals, including the popular magic number bonds cards and a guide with activities and games. The activities are written for teachers, learning support assistants or parents to support children in developing early number sense. The activities are child led; progress in small steps; give examples of good mathematical language and highlight links. The activities are perfect for guiding child led play; for use alongside more formal teaching methods or for intervention. We recommend starting with the complete pack as the Pegs and Boards alone do not include instructions for use. The Pegs and Boards are provided separately to be able to expand the full Pack as necessary, depending on the number of children using them. The pack is designed in line with teaching for mastery, boosting fluency by encouraging children to subitise and visualise numbers, while constantly making connections.

Spot On With Numbers’ Pegs and Boards has recently been added to the British Dyslexia Association’s (BDA) assured programme as it is recognised for its ability to support children with dyscalculia(BDA website). The dice patterns offer a way for children who are struggling with traditional methods, to access, subitise and visualise numbers. The ability to partition and manipulate numbers is also seen as a particular strength in embedding this skill which is so crucial for working flexibly with numbers. 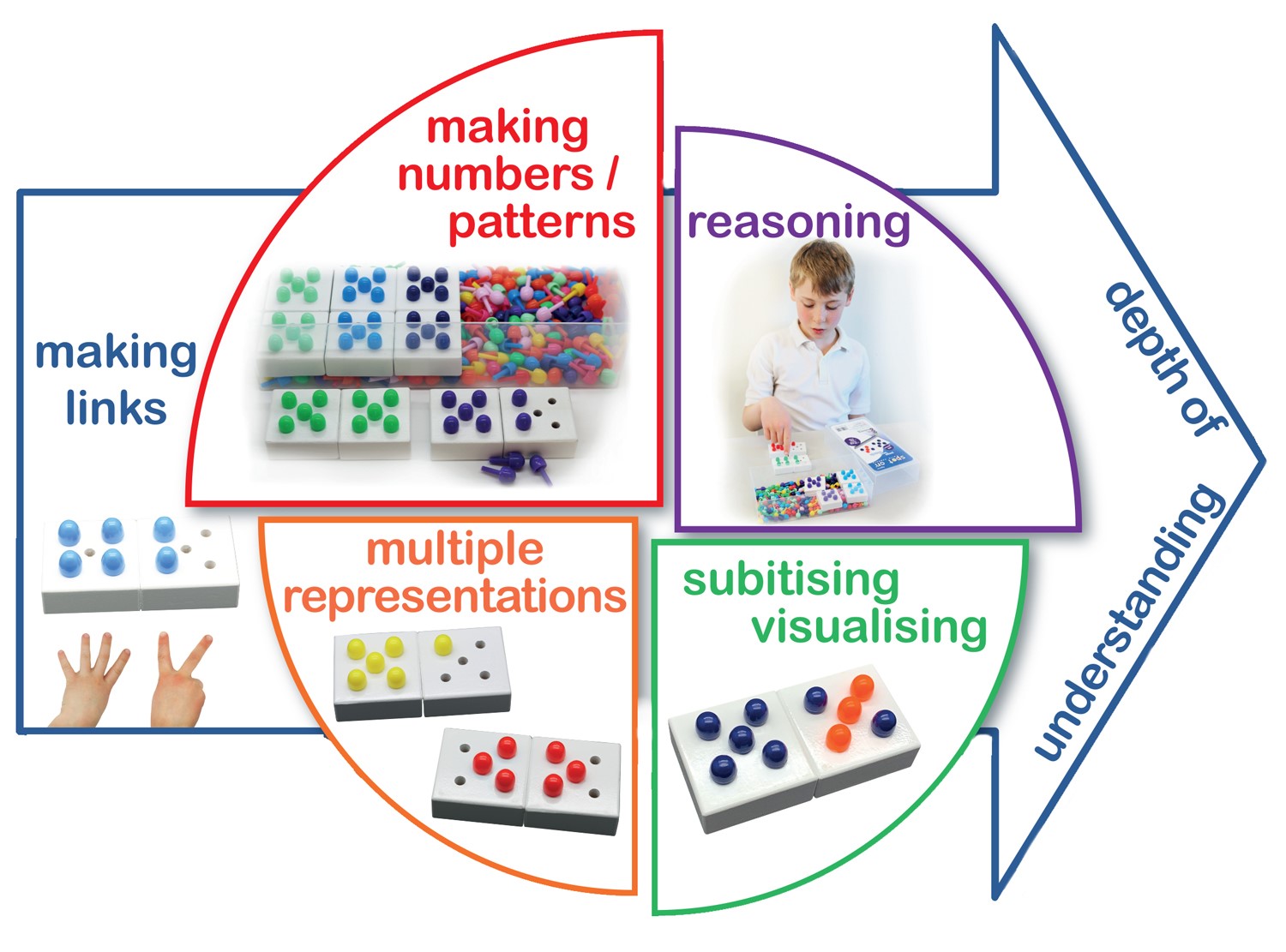 While supporting the children who take longer to develop number sense, Spot On With Numbers also gives the opportunity to provide greater depth activities to enrich children who are quick to master learning objectives. Spot On With Numbers offers structural variation and presents the opportunity to teach a concept using different manipulatives and explore multiple methods. 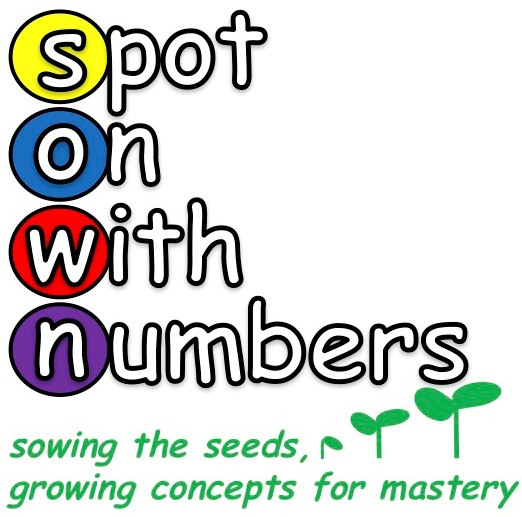