There has been a lot of talk and attention this year about the decline of arts education in schools. From recent research by organisations such as YouGov and The Fabian Society there is no doubt teachers feel that creative subjects such as music, art and drama have been seriously side-lined. They blame a crammed curriculum where subjects have to jostle for time and attention, too much emphasis on national tests, as well as budget restrictions.

Posted in: Primary / Music
Posted on Wednesday 1st May 2019 by Katie Addison
← Return to Blog Home

At the same time, Andreas Schleicher, Head of the Programme for International Student Assessment (Pisa) and a very influential voice in education, has said that the arts may become more important than maths in the future. He was referring to the ‘forth industrial revolution’ and the idea that knowledge-based education and what are traditionally considered ‘hard skill’ subjects such as science and maths will be less important than ‘softer’ skills such as curiosity, resilience and persistence.

Many people (the majority?) would contest that core subjects are indeed by far the most important, setting children up for life, and that art and music are “nice to have extras” or that they are great for children who have a particular talent, but aren’t that important for everyone.

Music as a subject can divide opinion more than almost any other (with the probable exception of RE) and has been debated this week on Channel 5’s Jeremy Vine show, when they asked whether music should take priority over maths. One caller to the programme felt her children had been let down by a primary school that were too led by the arts and as a result were “behind” and struggled in the core subjects at secondary school. However, the panellists, including Karen Gibson, leader of the Kingdom Choir who sung at Prince Harry’s wedding, were all staunchly supportive of music as a very important subject that could change lives in ways that mathematics could not.

Whatever opinions there are, music is still a compulsory part of the national curriculum and some schools truly believe in the benefits of making it an important part of their ethos.

Dallow Primary in Luton is one such school. Since their new head, Linda Nouch arrived, she has put music, and especially singing, at the heart of the curriculum and the school has moved from Special Measures to Good, according to Ofsted.

With 98% of pupils EAL, the head feels their emphasis on singing has played a huge part in giving children confidence and more enjoyment of school.

Linda says: “To start with, you see the new students watching everybody else but very soon they start to pick it up, even though they might not understand what they are singing. I think part of it is because the assembly is a communal and not an individual activity. We don’t make children stand up and sing on their own, and everybody is joining in, so it is less frightening than a classroom. I believe it’s also to do with the rhythm of the signing and the visual props, it becomes a whole-body experience. I think it really helps to settle them. Often you see them singing in assembly first before speaking in the classroom.” 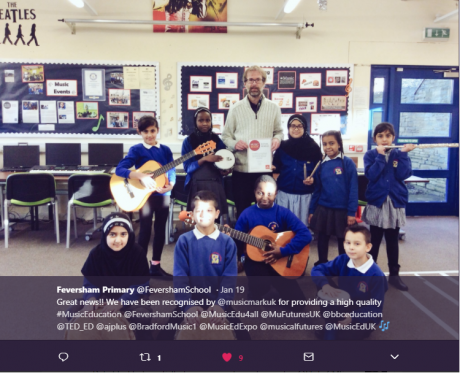 Feversham Primary in Bradford is another musical success story. Since the school’s focus on music as a compulsory subject they have gone from Special Measures to being in the top 10% of the country. Research by the music coordinator, Jimmy Rotheram, led them to the Kodály approach, with the philosophy that every child can be musical if trained properly. The approach is fully planned out long term and built on year by year with the teaching coming from within the school and every child having free access, rather than relying on peripatetic teachers who may only teach groups or individuals.

Jimmy says, “All the research and scientific studies show that music also hard wires the brain for all intellectual activities. Neurology has shown us in the last 15 years that white matter grows and develops with just 4 weeks of beginning music and movement training. Children become more focused and attentive, more coordinated (physically and mentally).”

“We are a happy school with an amazing atmosphere and high expectations.  Learning behaviour is now excellent, with improved listening and focus. High self-esteem means less bullying, improved attainment and higher attendance. Children and staff love coming to school! Every child is musical and many are exceptional for their age.”

Both Dallow and Feversham schools are members of Music Mark – an organisation that “lobbies for, and champions, a government supported, high quality, music education provision for all school aged children”. Much more detail about these schools may be found here and here; they are very interesting and thought-provoking reads.

Despite coming from different eras, Andreas Schleicher (head of Pisa) is in agreement with Kodály’s philosophy that studying creative subjects will help children become more adaptable for an uncertain future. As Kodály says, “Our age of mechanization leads along a road ending with man himself as a machine; only the spirit of singing can save us from this fate.”