Outdoor play is a key part to nursery life and is so often undervalued for one reason or another. We have a very well developed outdoor space but found that certain areas were just not used. We are situated in an inner city area so the luxury of woodlands, forest and the like, are not easily accessible to our nursery. With this in mind, we have enhanced our outdoor space by incorporating some trees, tree murals, raised planters and fast growing ferns in planters.

We purchased a new play house and had it placed in a strategic part of the garden on a decking area in the hope this would create interest and entice the children into what we imagined would be a communication friendly area. Sadly the play house became another home corner and failed to encourage play even after a supermarket mural was painted on the wall.

Our ‘before pictures’ show how our decking area used to be – a play house filled with what we thought the children would play with – including ovens, microwaves, pots and pans. This was very rarely used as the children already had access to home corners in their own rooms indoors.

We decided to trial some scenic back drops by TTS for outdoors. They are usually sold for indoor use but we decided the play house area could benefit from them. We introduced the backdrops first.

The woodland scenery backdrops transformed the space into the beginning of what looks like a woodland area. We added a second set to finish the look. This became an ideal space to create a new woodland area, incorporating camping, which links to most of the children’s interests. It also enhanced the communication friendly space for all children and we hoped we could encourage boys in particular to utilise this area.

We purchased some camouflage material and lined the inside of the play house (simply stapling it to the interior walls) so they were completely covered. We bought a cargo camouflage net to drape from the house to the overhead slats and utilised some of our existing foliage to enclose the entrance of the play house. The transformation in the space was dramatic. The natural light and shadows created by the net added to the woodland effect 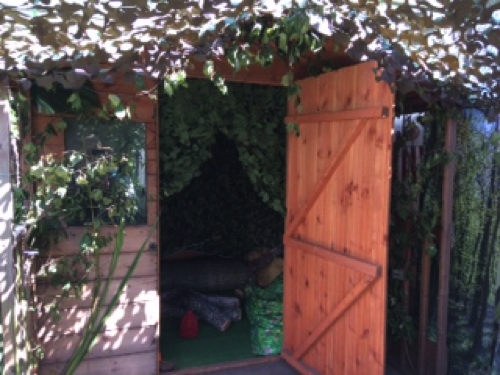 Next we needed seating. We wanted to create the most natural area which could withstand the outdoors. We provided outdoor bean bags, resembling fake logs and waterproof cushions. These finished the area off perfectly. 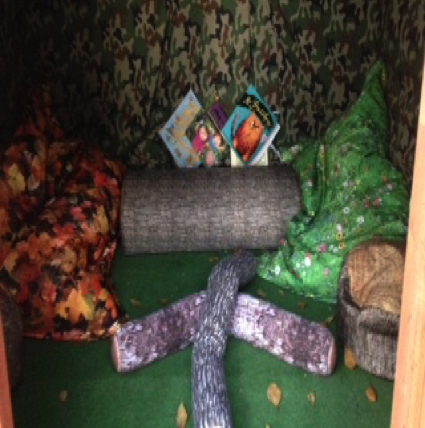 When the children are out in the garden, it is freely accessible for them to build their own role play ideas and activities. These include: camping – using toy lanterns and soft wooden logs and a teddy bear’s picnic – using small teddy bears, food and picnic baskets. We are in the process of introducing prop bags as discussion prompts and books are also put out for children to read at their own leisure, encouraging early literacy. 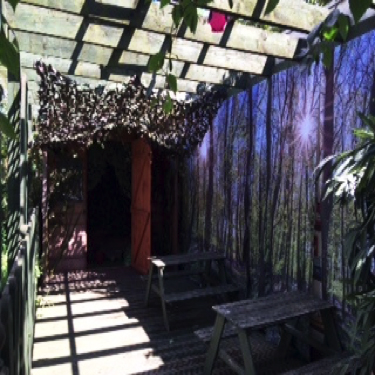 The area has created many ‘wow’ activities since it’s arrival; especially our recent bear hunt. We have the luxury of owning a full bear costume and we hid the bear’s head in the shed, peeking through the fabric!  The children were encouraged to search for clues around the garden eventually leading to the “Bear’s cave” (as quoted by the children).

We have managed to get good quality observations in many areas of the EYFS including ‘Expressive Arts’ and ‘Being Imaginative’ as children make up stories with each other. We have seen evidence of all kinds of ‘Communication and Language’, especially ‘Literacy’. Children who would not usually sit for a long period of time, including some SEN children, have been observed fully engrossed in story time and play in the house.

We introduced some fake logs to make a pretend fire (which are actually draft excluders from Home Bargain) which the children huddle around. They have access to this area in all weathers and can loll around in comfort without sitting on damp floors.

The shed is used for quiet story times when the weather isn’t appropriate. These stories include our children’s favourite, ‘The Three Little Pigs’, in which we encourage them to role play as the characters. ‘Dear zoo’ is another favourite, especially with the younger children, who are encouraged to recognise and talk about the different animals they see, including what noises they make, where they live and what they eat.

With thanks to Bev Bowden for writing this blog post. Bev is the Owner/Manager at 1st Steps Day Nursery.